Some sailors solve the problem by occasionally redirecting their panel. Do you do this every two hours from 4 in the morning to 10 in the evening so you probably only miss 10% in efficiency, but can anyone manage this?

Others solve the problem by placing the solar panel aft on the boat horizontally or somewhere on the ruff roof horizontally. Unfortunately, this is an inefficient method and it loses more than 60% of the 100 watts in the summer. In winter, it's a disaster. The solar panel doesn't give anything up. The same goes for mobile homes.

If you place your panel on a rooftop, you can't climb up several times a day and adjust it.
The solution is to construct a solar tracker that ensures that the solar panel is always directed perpendicular to the sun.
This described tracker solves the problems described above. The solar stand is a motorized stand with the property of following the sun from sunrise to sunset. This makes it both height and lateral within any percentage error and with only one engine. You can assimilate the entire panel's capabilities as long as the sun is over the horizon.

To us on earth, it looks as if the sun is making a conical movement across the firmament. The slope of the earth means that we get short days in winter and long days in summer. The height of the sun will vary from about 9 degrees in winter to 55 degrees in summer (12 o'clock and in Gothenburg).

By constructing the Solar Stand in such a way that we compensate for earth slope and date tilt, it is enough to have a 24 hour engine that spins the solar panel so that it at all times will follow the sun exactly. This provides a cheap and effective solution to our problem.

For those who have not thought much about the above problems, it may take a little while to understand the function, but we assure you, it works.

The pictures show the sun's rise and fall in Luleå winter and summer. Here it is obvious that Sunaimer is needed in the summer. With a fixed montage, you miss half the summer. North of the Arctic Circle, the sun is up all day and night in summer and Sunaimer follows all the time.
South over in Sweden it is less extreme, but even there it is important. The sun comes up 4 and down 22. It goes up to 37 degrees and down to 317.
What we learned in school that the sun rises in the east and down to the west only applies to the spring and autumn equinox. 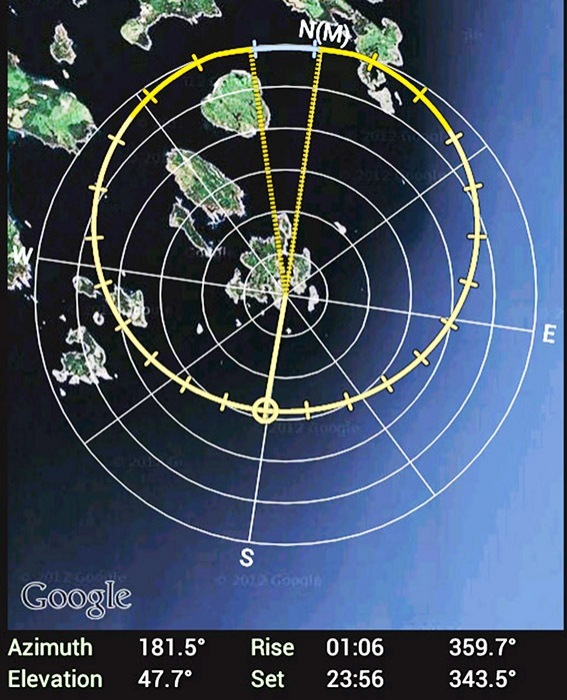